Meet Our Team at Gentle Dental Care in Wheeling, WV

Become a Part of Our Family Here at Gentle Dental Care

Doctors With More Than 40 Years of Experience Dr. Donald H. Lough has been a practicing dentist in Wheeling, WV, since 1980. He graduated from West Virginia University with a degree in Biology in 1974. He continued on to WVU School of Dentistry, graduating in 1979. He completed his general practice residency program at the WVU Medical Center. Dr. Donald Lough loves West Virginia. He married his wife Amy and raised two children, Jared and Courtney, right here in his home state. Dr. Donald Lough is affiliated with: Following in her father’s footsteps, Dr. Courtney Lough became a dentist. She graduated from the University of North Carolina-Asheville before going to the WVU School of Dentistry. Starting at the age of 12, Dr. Courtney Lough started working at Gentle Dental Care with her father. She has held most positions at the practice before becoming a dentist herself. She recently married her long-time love, Erich Hempelman. Dr. Courtney Lough is affiliated with:

Teeth cleaning is one of the most important areas of personal hygiene. Having professionals handle a deep cleaning prevents potential problems down the road. Dental hygienists at Gentle Dental Care use state-of-the-art cleaning technologies. They not only clean your teeth, but also ensure that your teeth cleaning visit is as quick and comfortable as possible. 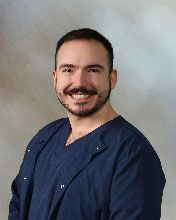 They say behind every great dentist is an amazing dental assistant. We believe this saying is true. Our trained and experienced dental assistants are here to help prepare, assist, and advise on all of your dental needs. Your comfort is their number one priority. Our administrative staff utilizes computer scheduling to make scheduling your appointments quick and easy. They can also assist with payment options and aftercare advice. Schedule an appointment at Gentle Dental Care in Wheeling, WV, and meet our team.